Can the Federal Reserve get the transition right this time?

In recent weeks there have been several articles published in the financial press on the topic of the potential for there being a repeat of the taper tantrums of 2013. The so called ‘taper tantrums’ arose as the world’s major central banks began to signal the unwinding of their quantitative easing (QE) programmes following the Global Financial Crisis of 2008 (GFC). The markets mistook these signals to indicate the start of a new rate tightening cycle.

As you might recall back in May 2013 the then Federal Reserve Chairman Ben Bernanke in a statement commented that they would be beginning to reduce (or taper) their bond purchase programme. Immediately in reaction, (or overreaction hence the term ‘tantrum’), short and medium-term rates spiked and it was not until September of that year that the Federal Reserve rowed back and delivered a surprisingly dovish outlook which eventually settled the rate markets.

Given the recent interventions by governments and central banks, this time to an even greater magnitude to that of the GFC as they have attempted to shore up economies hit by the global pandemic, it is no surprise that the question of whether history might repeat itself or at least rhyme is being posed. Will the miscommunication lessons of 2013 be learnt, and will we have a smoother transition this time as and when the global economy is again weaned off such support measures? Many investors are now forecasting this transition to be the next major market risk post the pandemic.

The speedy development and roll-out of vaccinations is leading to a re-opening of the global economy and many of the key leading economic indicators are showing rapid growth rates and expectations for higher levels of inflation. As you would expect this is good for equities and real assets though not so good for bond investors as has been demonstrated with the sell-off seen so far this year as longer-term sovereign yields have risen. The Federal Reserve meanwhile has made clear that whilst they expect QE to moderate through 2022, they are not overly concerned about future inflation levels and are in no rush to move interest rates any time soon and not until well into 2023 at the earliest – see the latest Fed funds rate expectations and forecasts below. 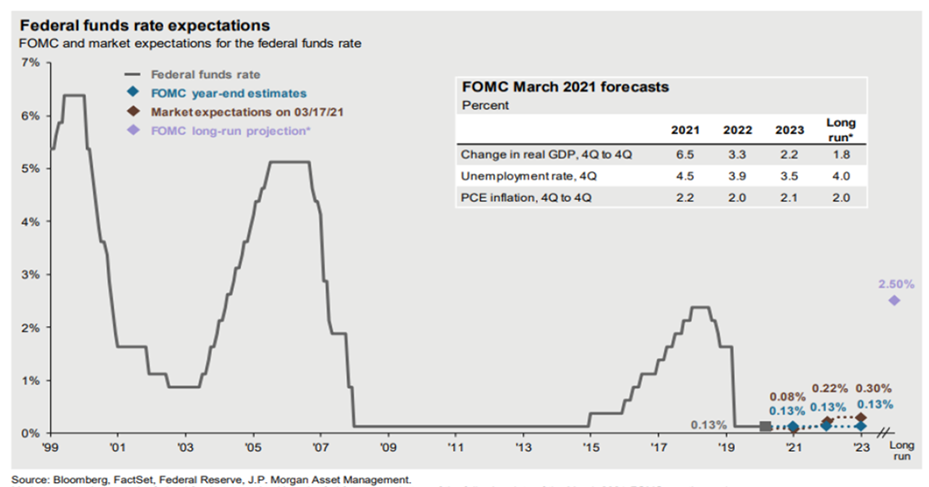 The issue is that the market does not always agree with the Fed and it often challenges their forward guidance. In February we saw early signs of dissension as the market began worrying about the prospect for higher levels of inflation and started pricing in rate hikes for early 2023 which led to a rise in the US Dollar and created headwinds for the emerging markets. Talk of ‘taper tantrums’ understandably began to re-emerge.

Importantly however lessons were learnt from 2013 and the Federal Reserve has introduced new targets and has changed the language of its regular communiques.

Average inflation targeting (set at 2%) has now been introduced although the precise mechanics of this are vague (perhaps deliberately so) which means the 2021 inflation data can be largely discounted owing to the base effects of 2020’s data. This new average inflation target is now also coupled with meeting employment level requirements in terms of the unemployment rate and job openings data. These serve both to give the Fed greater flexibility in setting policy and allowing them patience in monitoring several economic variables and ultimately maintaining rates lower for longer than would have been previously possible.

So perhaps the prospect for a recurrence of a ‘taper tantrum’ has become less likely though the Fed will still need to carefully handle the transition from tapering QE to signposting the beginning of a new rate tightening cycle. With the new ability for the Fed to be more patient, comes a trade-off that markets will become increasingly concerned about the future rate of inflation, making any misstep very costly in terms of market turbulence. 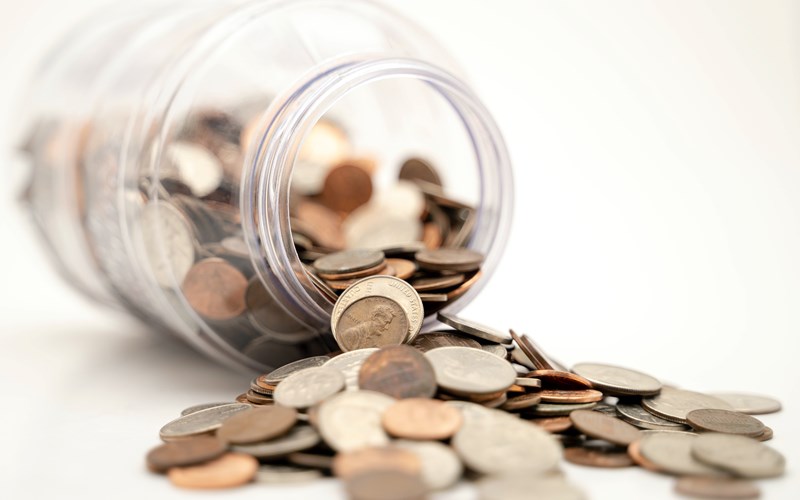 Do I need to worry about inflation

The Rise of the Retail Investor