The Rise of the Retail Investor

By the end of June 2020, as much of 20% of all trading on the US equity market could be accounted for by retail investors, individuals who buys securities for themselves rather than on behalf of an organisation.

Nasdaq Corporate Solutions estimate that the share of daily trading volumes by retail investors increased by 5% over the first half of 2020 and from just 10% in 2010. More than 1 million new online brokerage accounts were opened in the first quarter of 2020 alone. The surge in retail investors can partly be attributed to the market declines in March last year, as new opportunities were created by stocks falling to levels that had not been seen for years. The S&P 500 index returned +17% per annum between March 2009 and the cycle peak on the 19th February 2020. It is likely that historic low interest rates combined with increased leisure time and additional pressures caused by pandemic-induced lockdowns, together with increasing accessibility to the stock market for individual investors through zero commission accounts and millennial friendly trading apps, have also facilitated the rising trend. Whilst reports of retail brokers’ orders show that most trades are small and on average less than $12,000, collectively this cohort has become increasingly active, sophisticated and influential. 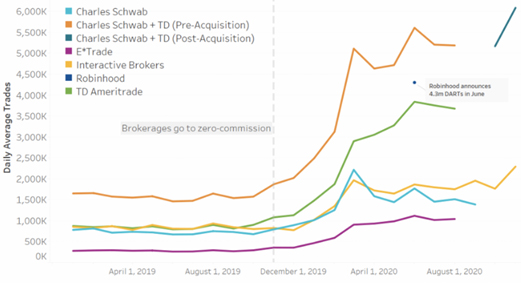 GameStop is an American high street video game retailer, the recipient of a lot of recent media coverage after being caught in a battle between the growing number of retail investors and the established professionals. With the pandemic keeping people away from GameStop’s stores and its prospects for growth looking challenging, it became one of the most shorted publicly traded companies. Short sellers, who are typically professional investors, profit from falling share prices. They borrow shares of a company from other investors and sell the shares on the market, before buying back the shares at a lower price to return the shares to the lender. If instead the share price rises, short sellers are forced to cover their positions or buy the stocks (at a higher price than they previously sold them for) to minimise their losses. One particular online community, now consisting of over 8 million largely young retail day traders, had for the past couple of years held a different view on the value of GameStop. They had been making a case for buying the Company’s shares, as they believed they were undervalued. It is now well known that this Community’s two main common goals are: to drive up stock prices and therefore profits for themselves; and to also force the established professional investors out of their bearish bets against struggling companies, such as GameStop.

Although the share price of GameStop had been building for a while, supported by an announcement on the 11th January that three new directors with much needed digital experience were joining the board, this cannot account for the 8,000% rise in the company’s share price over the past six months. On the day of the announcement itself, GameStop’s stock rose by around 13%.

To provide a sense of perspective, the share price was USD18.84 at the beginning of the year and it closed at USD325 on the 29th January. The driving force behind the recent share price action ultimately had little or arguably nothing to do with the future earnings potential of the Company itself. Instead, millions of retail investors, including billionaire Elon Musk, acted together to buy the Company’s stock, pitting the retail investors against the professionals, creating sufficient additional demand to push the price of GameStop shares up, drawing in more interest and more social media fuelled investors. With the price of the stock going the wrong way for the short sellers, professional investors were forced/chose to step into the market as buyers to cover their positions and put a cap on their losses and in doing so created a short squeeze and a spike in the volume of shares traded, which pushed the price higher still. More than 195 million GameStop shares were traded on the 22nd January 2021. This compares to the beginning of the year when the volume was just over 10 million a day.

While it seems that David, rather than Goliath, gained the upper hand on this occasion, there will be many investors who will not have such a jubilant tale to tell. Several popular trading platforms used by millions of retail investors suspended purchases of GameStop on the 28th January, citing volatility. This only added further fuel to the fire. After surging by 80% from the market-open that day, the news of the restrictions saw the stock fall intra-day by more than 75%, before closing 44% lower on the day. The trading restrictions attracted considerable criticism, with many high-profile individuals, including US politicians, showing their support for the retail investor. Restrictions were promptly reduced and the share price skyrocketed once more the following morning, opening up by over 95%. To be clear, a short squeeze is not revolutionary, but it is in this case due to it being caused by retail investors, rather than professional investors. In seeking to protect the integrity of markets, these events have led Treasury Secretary Janet Yellen to call for a meeting with the US Securities and Exchange Commission, the Federal Reserve and the Commodity Futures Trading Commission to discuss whether trading has been consistent with fair and efficient markets and wider-ranging issues in the financial services industry. The SEC warned that “extreme stock price volatility has the potential to expose investors to rapid and severe losses and undermine market confidence”. It is not certain what the outcome of the meeting will be, but it is likely that retail and professional investors, as well as stockbrokers can expect tougher regulation.

Whilst this article does not seek to provide a view on industry regulation, the future role of exchanges in facilitating and regulating trades or the future of short selling and the funds which employ this strategy, the GameStop phenomenon serves as a reminder of a few general investor principles:

At the beginning of any client relationship with IAM Advisory, we seek to understand a client’s appetite and tolerance for risk. This remains central in setting a client’s objectives, an appropriate asset allocation and an investment structure. We identify which managers will best meet a client’s needs and which role they will play within a structure and engage with managers with differing specialisms and styles within and across asset classes in order to maximise the return potential whilst diversifying risk. You will be able to find more details on how we structure an investment portfolio and some of the factors we consider when building a client’s investment structure in earlier notes written by my colleagues, David and Simon. Once an investment structure has been established and the managers appointed, we continue to monitor and review the managers and investments to ensure that they remain in-line with their assigned guidelines and objectives. It is through this continuous cycle that we can identify if a portfolio is drifting from its original targets and determine if changes need to be made to optimise the risk/return profile of the portfolio. Although the mania caused by the short squeeze on GameStop has now calmed a bit and a case can still be made that the Company was undervalued, its share price remains elevated and at a level which is not supported by current fundamentals. We do not know when the GameStop bubble will burst or what changes may come about as a result, but inevitably reality will set in and some investors may find that they are left with nothing…